A turtle, a rabbit and a little girl walk into a toy store…It sounds like the makings of a great joke, but seriously speaking, we’re getting pumped for the annual Toy Fair, which officially kicks off this Sunday. Some companies decided to get an early start on things, and that includes Nickelodeon. We were invited to the unveiling of their 2014 toy line-up, highlighting a handful of their top brands, including SpongeBob, Peter Rabbit, Teenage Mutant Ninja Turtles and the latest chapter in the Dora saga, Dora and Friends. Here’s what you can expect your kids to be pining for in the coming months:

Everyone’s favorite sea sponge (is there any other?) was front and center at the toy preview, with more than 30 new products hitting store shelves this spring and later in the fall. Among the SB assortment is a Talking Krabby Patty Maker, collectible SpongeBob figures from some of his most popular episodes, remote-control cars and the Bikini Bottom Raceway. With this July marking the 15th anniversary of the show and next year’s feature-length movie on the horizon, we expect there will be lots more in store for the entire Bikini Bottom gang. 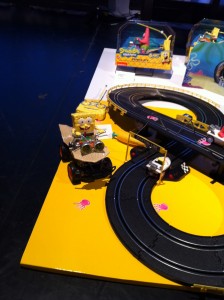 The beloved Peter Rabbit has made a resurgence, thanks to Nickelodeon’s hit TV show. Now new moms and preschoolers alike can bring this bunny home with a slew of new merchandise for the nursery and playtime. Our favorite baby item is the Peter Rabbit Play Gym from Infantino. Available this spring, the play mat boasts a storybook-inspired illustration that’s a delight for any baby’s room. Preschoolers will go bonkers for the Hopping Peter Rabbit and Treehouse Playset, both from Cartwheel Kids. 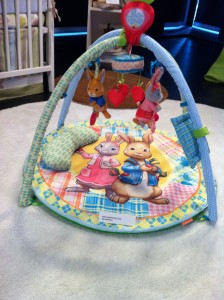 Did you hear that Dora the Explorer is all grown up? While the favorite preschool series still lives on, its newest counterpart, Dora and Friends will begin airing in September. She’s now a bit older, is living in the city and continuing to explore the world around her with her gal pals. To welcome her to the toy aisle, Fisher-Price is introducing a slew of products, including a Talking Dora that comes with a play smartphone that girls can use to interact with her; a collectible dolls assortment; playsets like a cafe, cabana and animal adoption center; and a line of charm bracelets. 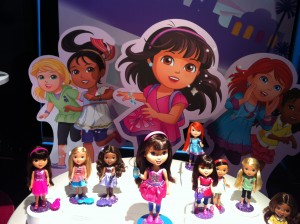 Last, but certainly not least are the Teenage Mutant Ninja Turtles. Newly designed action figures, featuring a storage component inside the turtle shell that cleverly conceals his weapon, are the answer to any mom’s prayers. There’s also an entire new line targeting boys ages 3 and up for all those little brothers who love the turtles, but aren’t quite ready for big kid play. It features playsets and vehicles in brighter colors, as well as action figures with smiling faces, all of which will be in stores in the fall. Of course, we couldn’t keep our eyes off the towering 48-inch Michelangelo who warded over today’s event. We thought he was just part of the product display, but lo and behold, he’s the real deal and will be enticing die-hard fans when he comes to stores this fall. 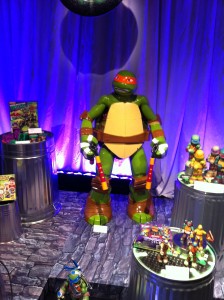 Stay tuned for more news about all the hits from this year’s Toy Fair, beginning next week!

View all posts by: Pamela Brill